Quinn Thomas is Cycling for Organ and Tissue Donor Awareness

Quinn Thomas arrived in Winnipeg, Manitoba at the Gift of Life Garden in Assiniboine Park on Monday, July 30th to meet concerned citizens, organ transplant recipients and health professionals to talk about Canada’s critical health care situation with regard to organ donations and to help people do what it takes to be an organ donor in Manitoba.
Five weeks ago, on his 21st birthday, Quinn Thomas (a 2nd year medical student from Montreal, Quebec) began a four-month solo journey of 8,730 kilometres bicycling across Canada from Vancouver Island to Newfoundland to raise awareness for organ and tissue donation.

Thomas invites recipients to cycle with him as he leaves each town, helping people to visualize the life-saving impact that organ donation makes on their neighbors and community.

“By such a simple act as registering as a donor and telling the family, each person can become a real-life hero!” he says.

Manitobans are encouraged to register their intent to donate their organs and tissues on SignUpForLife.ca, the province’s new online registry. “We appreciate Quinn taking it upon himself to bring awareness to the importance of organ donation and the need for more people to make the decision to be a donor and share that decision with their families,” says Dr. Brendan McCarthy, medical director, Transplant Manitoba Gift of Life.

Today, thousands of people are waiting for organs to receive a transplant. In 2010, there were 2,233 people waiting and the numbers continue to rise. In fact, during one’s lifetime, a person is 5 to 6 times more likely to need a transplant than to become a donor.

Thomas says, “I was shocked to realize that it would probably take me less time to bike across Canada than it would for a patient to receive a kidney transplant, which, in the best-case scenario, can take around 135 days for a living kidney donation or a national average wait of 1,258 days for a deceased kidney donor. Some Canadians have managed to survive 2,145 days until a match was found for them.”

Thomas was not motivated because of a family member. Rather, as a medical student, he realized, “Seeing these statistics, I have to do something – as a citizen and as a future doctor.”

While 85% of Canadians think that organ donation is a good thing, only 14% have actually signed their donor cards. This is why there are hundreds of Canadians who are dying while waiting for a transplant organ to become available. In 2010, in Ontario alone, 103 patients died waiting. Thomas thinks people are unaware of the disconnect between their good will and the need to act on it to help solve this critical problem.

Thomas just left the Canadian Transplant Games in Calgary where he spoke at the Gala dinner on July 18th. He has cycled over 2,000 kilometres in the month of July. 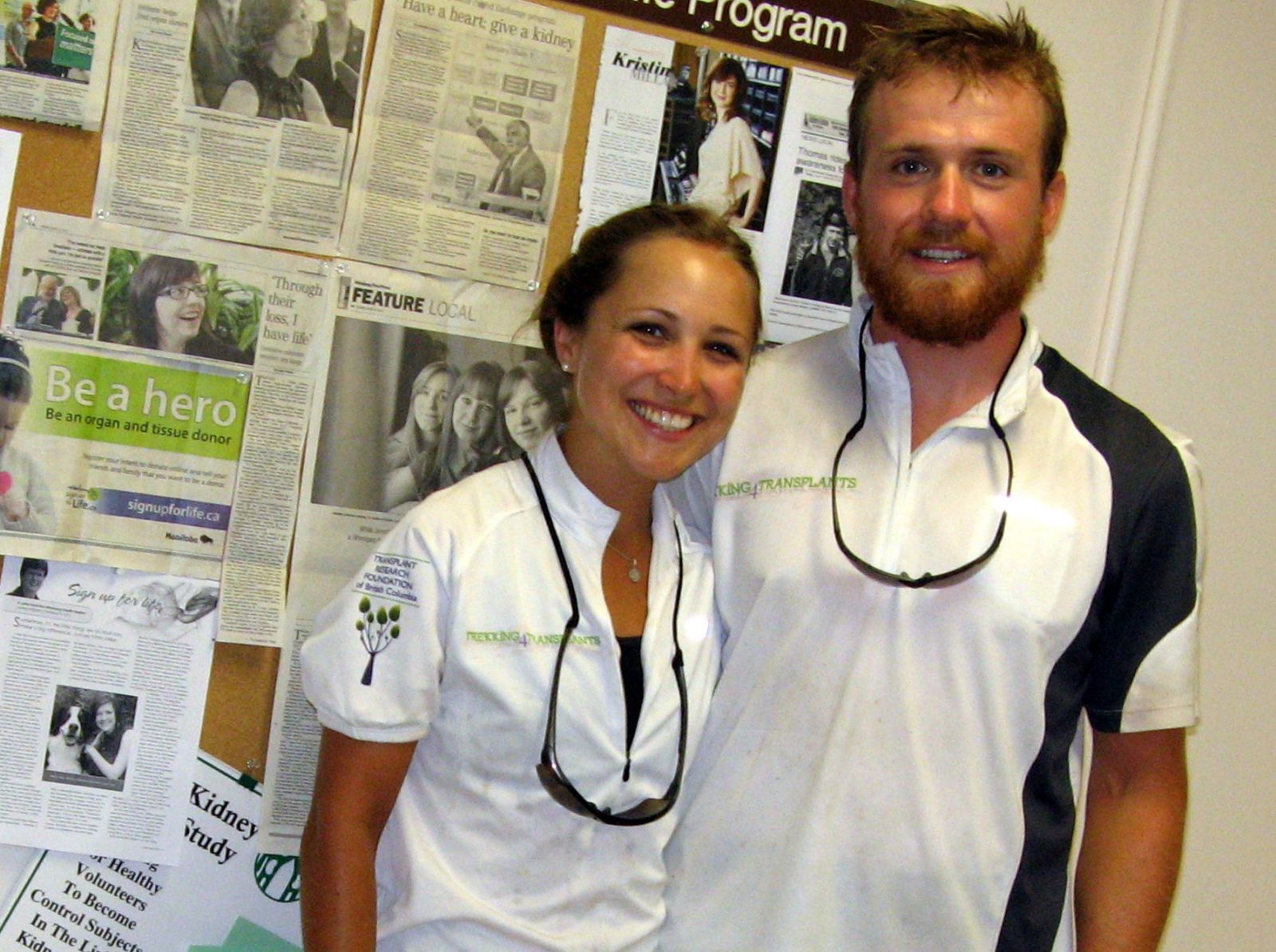 Kibby Evans and Daman Milsom embarked on a bike trek across Canada in the spring of 2012 to raise awareness for the need of registered organ donors as well as raise funds for organ transplantation research.
By raising awareness they hope to encourage at least 10,000 Canadians to become registered organ donors. The duo also has a fundraising goal of $50,000 to aid transplant research in Canada. Please join them on their trek for transplants as they pedal for the thousands of Canadians that have been and will be affected by organ transplantation.